HERE IS A LIST OF OMEGLE ALTERNATIVES THAT YOU MUST CHECK OUT.

Who does not like socializing? Extroverts covet it and even if you are an introvert; you have to speak with someone eventually. No matter what kind of person you are, you will find someone in Omegle. This is a website which allows you to have a conversation with complete strangers from different countries while discussing your mutual interests.

As of now, Omegle has become a controversial site. But before getting to the controversial part, let’s start by giving you a brief history of Omegle and my personal experience while using it.

It randomly pairs strangers based on their mutual interests. Instead of usernames, it uses “You” or “Stranger” to communicate. Under the “Spy Mode”, it implements names like “Stranger 1” & “Stranger 2”. Omegle is also available as a mobile app. 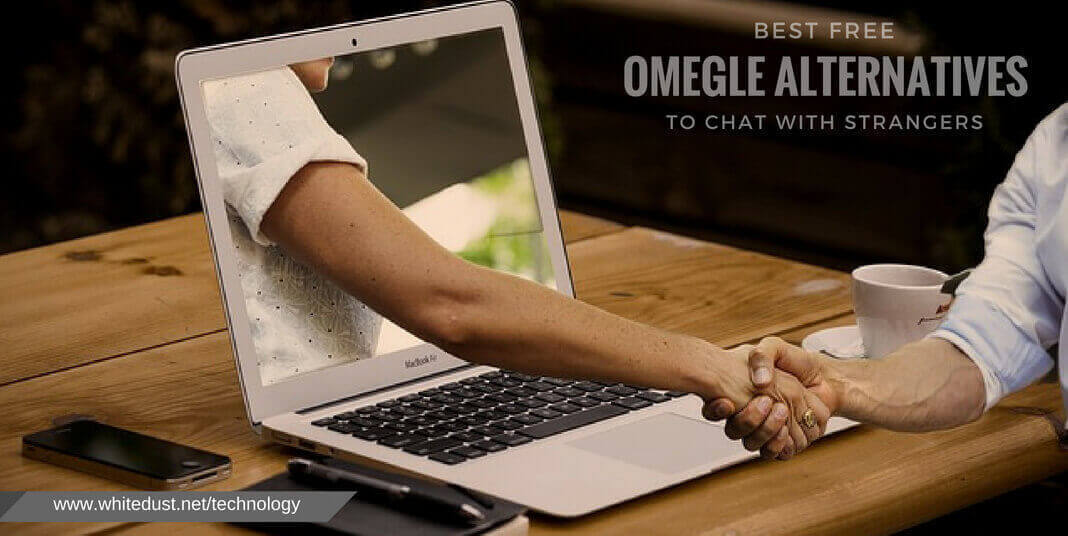 According to my personality, I love interacting with various people no matter if they are from my own country or a different one. I came upon Omegle while searching for an alternative to Facebook. I was bored using Facebook. I sent requests to people who know me but I was unhappy with how open all your activities are to your friends.

My initial assessment of Omegle was highly positive and I found it very exciting to chat with different people all over the world. I thought “this is a perfect place to socialize”. However, imagine my horror when I came upon a naked man while browsing for a new person to talk to. If I, as a male, was grossed out by what I saw; how would a female feel if subjected to the same disturbing image.

Even if you immediately hit the ‘Escape’ button, the damage is done. What has been seen can’t be unseen. Although the site mentions that it does not promote nudity or any pornographic content, there are tons of people who do not take this information into consideration. Omegle, in order to monitor these kinds of behaviors and protect underage people from watching harmful contents, has also implemented “monitored video”.

However, with hundreds of thousands of conversations ongoing at the same time, monitoring all of them is an immensely tough job to do. Also to prevent bots from entering the conversation Omegle introduced ReCaptcha but was still able to pair with bots while searching for strangers. So my final verdict is that Omegle is barely safe for people looking to have a decent conversation. I feel that when your Dad told you to stay away and not to talk to strangers, he meant Omegle.

There have also been various cases of controversies surrounding Omegle. In 2014, a couple from Minnesota were tried for the creation and distribution of child pornography via Omegle. Omegle detected it and reported it to National Children for Missing and Exploited Children. The Law enforcement was able to track them through Omegle IP address. 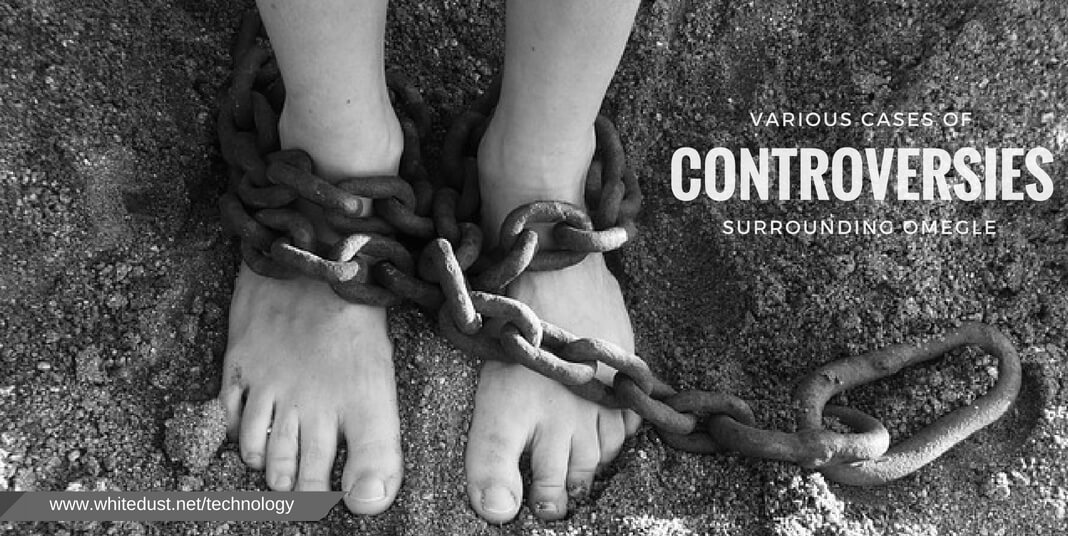 In 2018, Casey Lee Chinn, a 23-year-old man from Burnsville, Minnesota met 13-year-old twin sisters via Omegle. He took them to his parent’s place and then sexually assaulted and kidnapped them. He hid them in the basement as his parents stay upstairs. Police were able to track their location through the girls’ mobile phones. As of now, Chinn has been charged with six counts of criminal sexual conduct.

Also Read: Now You Can Find Who Unfollowed You On Instagram

With all said and done; I have compiled a list of websites, which offer the same feature but has less controversy and some additional features when compared to Omegle. I cannot guarantee that my collection of alternatives to Omegle might be free from explicit content but for people who feel that Omegle is not the best for secure conversations or might need a better user experience; these are the few alternatives that I recommend you to use.

In my case, I was annoyed by bots and nudity content frequently popping up every time I went to look for a serious but straightforward conversation. One other factor was the controversies surrounding Omegle which made me route for different sites.

Also Read: How To Encourage A Friend 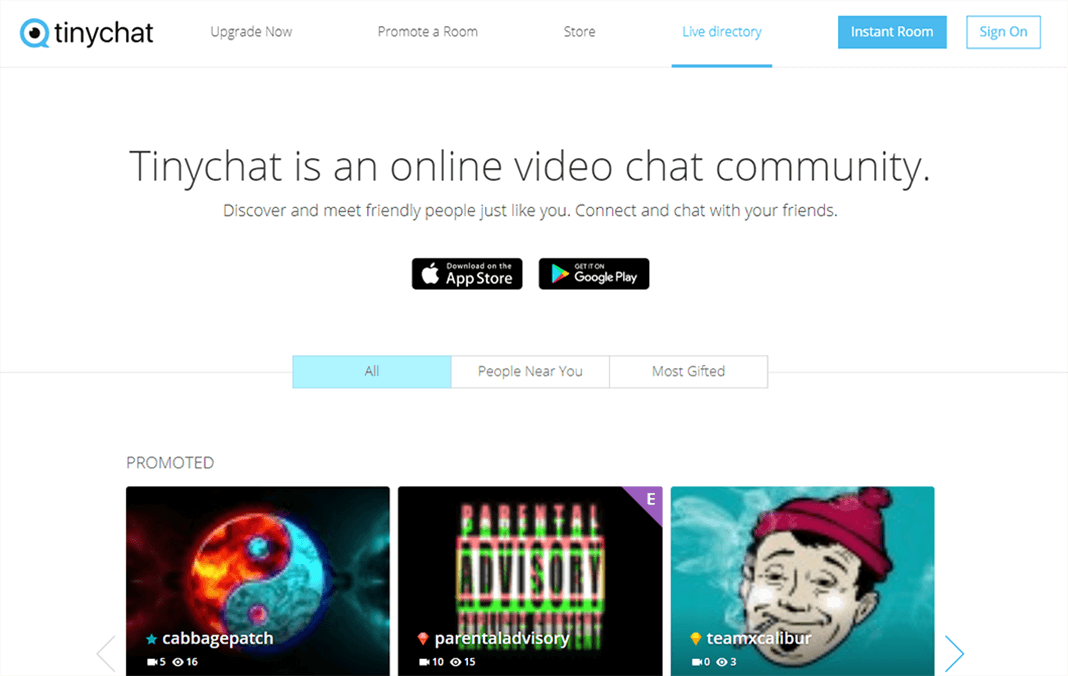 Founded in 2009, TinyChat is also an online chat website. Unlike Omegle, it does not feature a random chat option. TinyChat has video based groups which help find users with mutual interests. At a time, TinyChat limits to only 12 people in a group.

You can also join any group or create a group with a topic. You can further invite your friends to join in and even allow random users to join. The whole group can talk about the subject topic. TinyChat has a vast range of groups making this the biggest regarding video-based group chat sites.

As a Game of Thrones fan, on my first venture into TinyChat, I created a GOT group. As the group creator, I had control to remove any member. So the member with spoilers was the first to be kicked out of the group.

TinyChat has some excellent user interface. You can see how users are viewing your video and also include non-group members to view your video. I would personally recommend this site as you can get access to the various topics you might be interested in with great ease. The website also has a “Nearby” option which will help you in finding users around you. Also features a “Promote a room” feature to make your group reach out to the users.

TinyChat is also available on Play Store and iTunes.

Almost boasting the same features to that of TinyChat, InstaChatRooms is another alternative to Omegle. It allows you to connect to strangers via joining different groups. InstaChatRooms has a dedicated adult chat room section which prevents underage users from entering it. However, they can still come but if they share explicit contents, the user will be banned permanently and immediately.

I would recommend every online chat website users to try InstaChatRooms at least once. It already contains groups on a variety of subjects and you are just required to enter the room of your choice. Currently, it has about 100 chat rooms in more than 20 different categories.

Personally, I felt nostalgic while using InstaChat Room as the user interface is reminiscent of 90’s text chat rooms while being quick and user-friendly. If you are looking for something simple and subtle, I would say, Give InstaChatRooms a try.

Probably the most similar online chat websites to Omegle, ChatRoulette was launched in the same year as Omegle. Created by a Russian guy named Andrey Ternovskiy in 2009, ChatRoulette came with the same features to its compatriot Omegle.

ChatRoulette garnered a massive number of users to its website even without advertising itself on any platform. Every time a user has broadcasted or sent an inappropriate message, it shows a pop-up message saying that three out of five people didn’t like the message broadcasted and have lost this game. And therefore are banned for 40 minutes.

They also have moderators who are monitoring the webcam feeds and mark the inappropriate ones. With the help of this filter technology, it can ban inappropriate users daily. This is the reason why some call ChatRoulette, the updated version of Omegle.

Also Read : HOW TO PROTECT YOUR DEVICES FROM CYBERCRIMES & ONLINE THREATS?

I found this website to be an alternative for ChatRoulette, as it offers the same functions. I started using this after ChatRoulette started to change its rules repeatedly. ChatRandom offers users people to connect all around the world and is currently adding new countries.

It also supports various language to make conversations a lot easier. All the features included in ChatRandom are 100% free and do not require any sign-in. It claims to be the fastest growing webcam-based chat site. It also provides a lightning fast connection from one stranger to another within seconds.

The one feature I especially found great was Cam4 Chat, which allows you to connect to four strangers at the same time. And also the main feature of ‘chat with only girls’ without having to browse through the cams of guys. Cool, Isn’t it? Give this a shot, as I found this one to be a time saver.

Probably the most unique one among the chat websites, as Fruzo allows you to connect with your facebook account(I guess privacy should not be limited) or also create a new account. You can also add people to your friends’ list just like any other social network. With the search bar, you can find new friends by typing their name, age, country, gender or a specific keyword.

If you like someone, just follow them to stay updated with their recent activities; chances are that you might also get a follow back. Now, you are able to view photos of users around the world with the picture search option.

This compares itself with the likes of Tinder. However, Tinder only shows images of users, while with Fruzo, you can start to know who you are talking to rather than just gawk at a picture.

With some fantastic and high-end interface, I would never get this out of my cell phone and after linking my facebook account, it just adds to the favor.

Also Read: Best ways to get a girlfriend in 2018 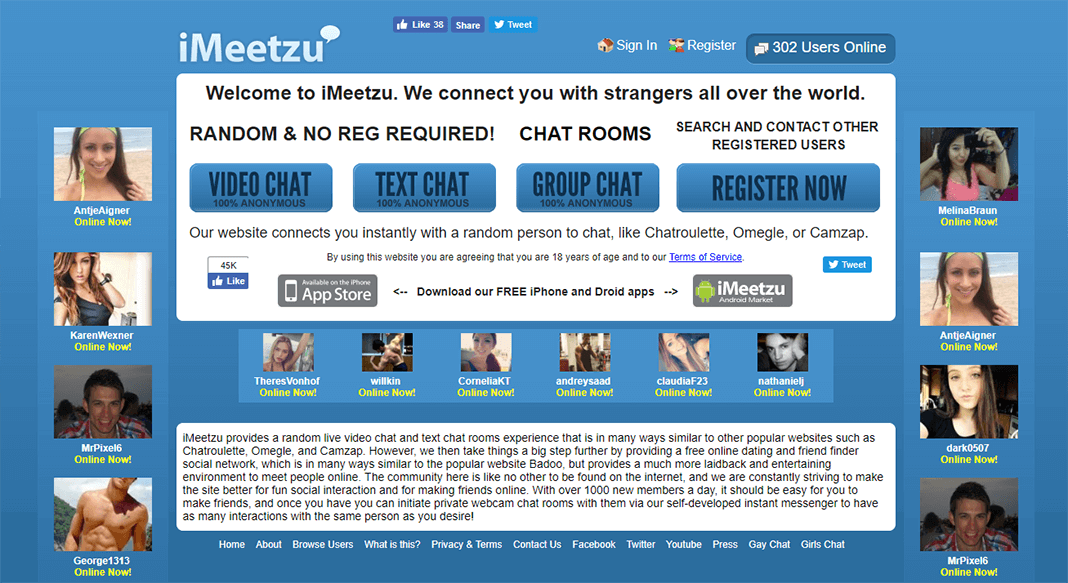 iMeetzu allows you to connect with strangers in similar ways to Omegle and ChatRoulette. It is trying to take things in a big way by providing free online dating and ‘friend finder’ social network with a much more entertaining environment to meet people online.

iMeetzu claims that thousands of new users are joining in every day. Getting registered with iMeetzu is not that hard, you just need to follow some simple steps and get your conversation with a stranger started.

So these were just a few alternatives to Omegle. If you look on the internet, you will find many more options to consider. But before you get going with these sites, you should know what you are putting at stake: from your face to your identity or someday might even face bullying. These are the points you need to take into consideration:

Well… if I keep mentioning the points, I probably have to come up with another article of cons. So feel free to write to me about the things you find that have to be taken into consideration. Also, mention the sites you found to be safe and secure (with fewer perverts) in the comments section below. Be careful, stay cautious and stay safe.

10 ANDROID APPS YOU SHOULD HAVE IN YOUR SMARTPHONE IN 2017