Do you want to shed a few pounds in a short span? Do you not have time for exercise or jogging? If so, you should consider undertaking the grapefruit diet plan.

What Is The Grapefruit Diet?

The grapefruit diet plan was introduced in the US in the 1930s and it varies vastly across the US.

Some Grapefruit diet plans are very strict and demand that a person eats only grapefruit and drinks only its juice for ten full days!

Other grapefruit diet plans are more flexible and allow a person to eat protein and fiber-rich foods (both Veg and Non-Veg) along with a glass of grapefruit juice three times (during breakfast, lunch, and dinner) a day.

Both the grapefruit diet plans forbid the intake of carbs and starch-rich food like rice, flour, potato, etcetera as that would be detrimental to the desired results. Consumption of other fruits is also forbidden.

They also forbid a person from doing exercises as that requires a lot of energy and the grapefruit diet program gives a person very little calories.

It was for this reason that the grapefruit diet program had nicknames like ‘10 Days 10 Pounds Off’ program or the ‘Hollywood Diet’ program.

The grapefruit juice diet program is based on the qualities of the grapefruit to aid in weight-loss and to maintain nutritional levels in the body. Grapefruit is rich in Vitamin C, Vitamin A, fiber, and various minerals. It also has trace amounts of protein. It is also low on calories. It contains only 69 calories.

The Vitamins and fibers present in grapefruit help the body breakdown and burn fat quickly. Since it takes 100 calories to digest a grapefruit and since it gives only 69 calories in return, the body loses 31 calories every time it digests a grapefruit.

The various minerals and proteins present in grapefruit are used by the body for various purposes. Thus the grapefruit diet program helps a person lose fat and weight quickly while at the same time giving him all the nutrients he needs for maintaining good health.

What to eat on the grapefruit diet?

Kindly brace yourselves. The flexible kind of grapefruit diet program allows a person to eat protein and fiber-rich foods along with a glass of grapefruit juice during mealtimes. The foods can vary depending on whether a person is a vegetarian or a non-vegetarian.

In our article, we are only going to discuss the non-veg foods that are had with grapefruit juice.

The recommended grapefruit diet chart is as follows:

This chart must be followed for 10 to 12 days without fail to get the best results. Following this chart religiously will reduce a person’s fat and weight and keep him healthy.

What you can’t eat on a grapefruit diet program

Don’t worry, it’s not as bad as you think. The grapefruit diet program restricts a person from eating foods that are rich in carbs and starch like peas, corn, potatoes, milk, rice, cereals, and sweets. Eating other fruits is also not allowed. One glass of grapefruit juice should be had after every meal.

No item in the diet chart should be omitted because every item plays its part in reducing the fat and weight of a person. Even if one item in the chart is omitted, it can cause the whole grapefruit diet program to become a failure.

Why the Grapefruit Diet Results Are So Amazing?

I’m sure that you’re all keen to know this so let’s dive right in. This topic is still under debate. Some people, including Hollywood stars, have claimed that it has helped them shed fat and weight quickly and stay in shape.

Some scientists in the US have questioned this program’s credibility and said that it didn’t work on them. Some people have said that they have benefited only marginally from this program.

Since this topic is controversial, I have listed a few reviews from people. Kindly read them and decide for yourself whether this program is worth undertaking. 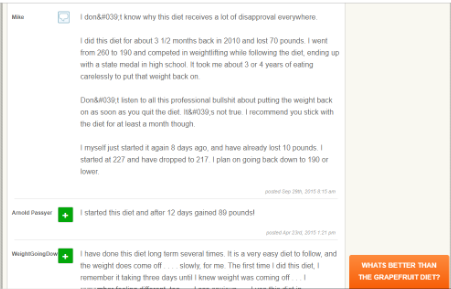 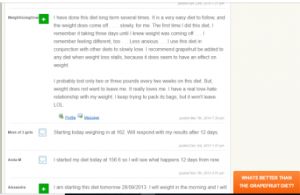 Is there any protein in grapefruit?

Grapefruit has only trace amounts of protein. One grapefruit contains only one gram of protein. So it’s not a great protein supplement. Listed below are the nutritional facts on grapefruit.

There are quite a few negative calorie fruits that can replace grapefruit in weight-loss programs.

Negative calorie vegetables like broccoli, asparagus, lettuce, and cabbage (as in cabbage soup) can replace grapefruit in weight-loss diets. Mushroom in the fried or soup form can also be a good substitute for grapefruit.

Pros and Cons of the Grapefruit Diet Plan for weight loss

As with all programs, this too has advantages and disadvantages. They are:

What experts say about the grapefruit diet plan?

Many experts (scientists in the US) feel that while grapefruit is good for health, it does not deliver on its weight-loss myth. They feel that a person can even reduce his or her weight by taking low-calorie foods and doing some exercise. Moreover, they criticize that consuming grapefruit causes allergic reactions in people on some medications.

Judging by the numerous testimonials, grapefruit does aid in weight-loss. However, one should consult with a doctor as to whether taking grapefruit will cause allergic reactions. Even if the grapefruit weight-loss program fails, it will not have any harmful side-effects. So one can proceed with confidence if one is not allergic to grapefruit.

1. Which medication causes an allergic reaction with grapefruit?

2. Can grapefruit be taken with antidepressants?

Yes, they won’t have too serious reactions to it. So it’s okay.

3. Can diabetic people have grapefruit?

Yes, as it does cause blood-sugar levels to fall. Studies have shown that it is as effective as taking commercially available allopathic diabetic tablets.

4. Can grapefruit be used to treat kidney stones?

Yes, substances found in grapefruit can dissolve the inorganic Calcium found in kidney stones. Grapefruit can even eradicate gallstones.

Have you ever had grapefruit juice before? If so, did it help you in weight loss? What other health benefits did you experience by having grapefruit juice? Please let us know in the comments section below.

What is Celiac Disease? What are the symptoms of it? How...