Mixer has averaged 2.7 million channels, and Twitch has 4.4 million in size. Although Mixer is relatively a new platform, it already has more than 61% of streamers. As an American video game live streaming platform, both are different in their standard base features.

Most users are already swaying towards Twitch, and the very fact that it has more viewers proves its efficiency. If you want to know the details, this article entails what Twitch is and the lifelong battle between them- Mixer vs Twitch.

Table of Contents hide
1 Mixer
2 Twitch
3 What is Mixer? What Happened to Mixer Now?
4 What is Twitch? Is it Still Available?
5 What is the Importance of Both Websites in Recent Years?
6 Pros And Cons Of Mixer And Twitch. Is Mixer Better Than Twitch?
7 What are the Advantages of Twitch? Things to Know Which Twitch Does the Best
8 Mixer Vs Twitch: An In-Depth Comparison Between the Two Live Video Gaming Channels
9 What Do People Think About Mixer Vs? Twitch Comparison? Which is Better? According to People’s Review and Internet Research
10 The Bottom Line
11 FAQs

What is Mixer? What Happened to Mixer Now?

Mixer was a popular video live gaming streaming platform with millions of users on board. It was launched on January 5, 2016, known as Beam under the co-founders James Boehm and Matthew Salsamendi.

The streaming platform was soon acquired by Microsoft in 2016 and then renamed Mixer. As it was integrated into Microsoft’s Xbox division, it gained impressive attention, signing up with the top streamers like Ninja and shroud for service.

But unfortunately, Microsoft stated that it failed to scale its operation and announced the shutdown of Mixer on June 22, 2020. The main feature is the streaming service was the usage of a low latency protocol known as FTL (Faster than Light) and helped users receive the broadcast with fewer delays.

What is Twitch? Is it Still Available?

Twitch is the main competitor for Mixer, which is why it set the trend called “Mixer vs Twitch.” As an American video live streaming service operated by Twitch but as a subsidiary of Amazon.com.

Launched in 2011, it was started as a spin-off of Justin.tv. The service focuses on music broadcasts, e-sports, video game live streaming, and much more creative content started recently. As of 2020, Twitch had over 3 million broadcasters and 15 million users daily.

What is the Importance of Both Websites in Recent Years?

Websites like Twitch have recently made an immense impact on cultural behavior in the country. Plenty of gamers have used the platform for many types of services. This service is a leading source for streamers to make a living along with entertaining the supporters.

Although Mixer is officially shut down, Twitch is still a popular website for streaming, but it is not alone. It has enormous competition in recent years, making it the one option to stream for themselves. It has been studiously facing competition from companies like Google and Microsoft.

Both platforms have their pros and cons. It is essential to answer questions better than Twitch, or the other way is necessary to understand better.

Also Read: How Does Hulu Work? What Do The People Say? Let’s Find out

Okay! So Which is Better?

According to viewers and experts, it is not just a simple yes or no answer; Each streamer has different needs and preferences for certain features. For some streamers, Mixer might be better, while some prefer Twitch for tremendous features.

Hence, to understand it better, let’s consider different features considering key factors like ease of use, potential audience, competition, and other factors not to waste your time on the wrong platform.

Pros And Cons Of Mixer And Twitch. Is Mixer Better Than Twitch?

What are the Advantages of Twitch? Things to Know  Which Twitch Does the Best

Here are the benefits of Twitch prime to gamers in case you missed it:

Mixer Vs Twitch: An In-Depth Comparison Between the Two Live Video Gaming Channels

Although Twitch is way more giant in features and other elements, it does not mean it is better than the other. Let’s take a more in-depth look at the pros and cons of the two different streaming platforms. 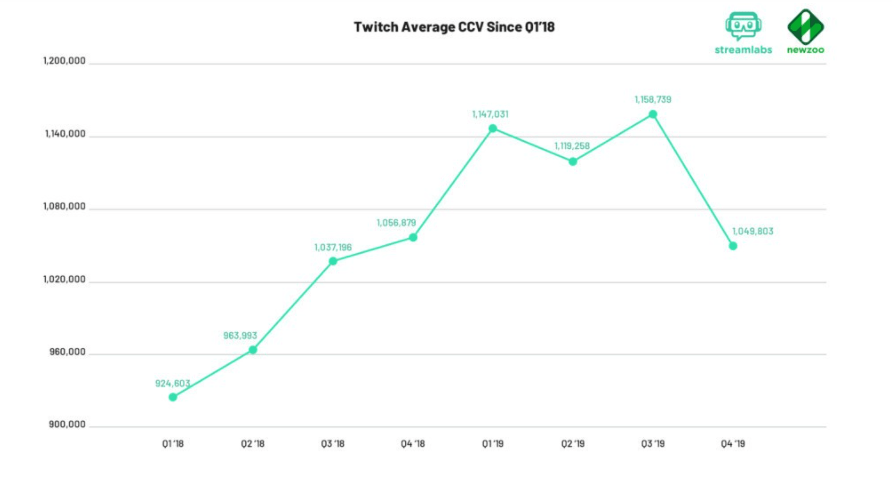 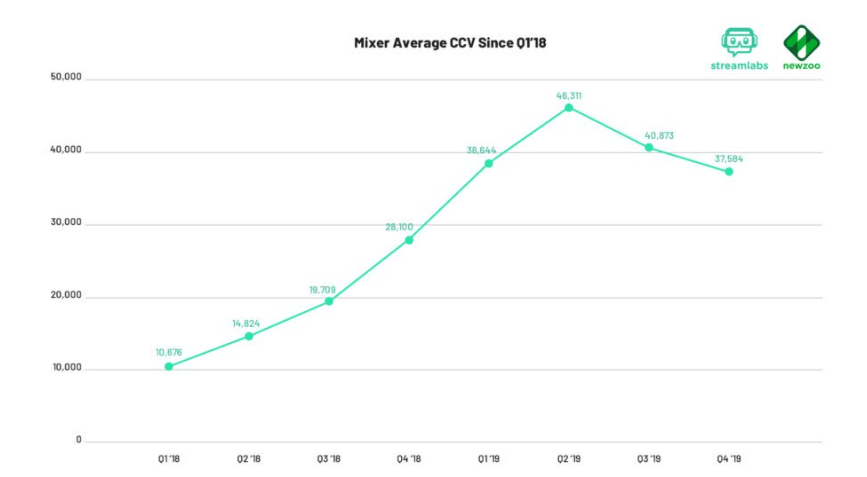 Mixer live streaming is considered faster than Twitch through its powerful FTL technology when it comes to infrastructure. In a Mixer, the streaming time is less than a second, while on Twitch, it can sometimes delay up to 20 seconds.

You can take real-time viewer poles being a Mixer streamer. The advantage of Twitch is that you can easily navigate and record. Not only that, the dashboard system on the system is very powerful and provides excellent analytics.

Twitch has an enormous viewer base compared to Mixer for new platforms with a large share of streamers. Although this looks like an advantage, it can only show few streamers at a time. This makes it extremely hard to get noticed compared to Mixer.

Becoming a leading streamer or partner in the Twitch program takes years and more effort because of too much competition. But in Mixer, the competition is less; there is a good chance you will get a significant following through the platform.

When it comes to community as a whole, Mixer has a friendlier community compared to Twitch’s toxic one. Your personality will either gain you a significant following or repel the viewers who want to chat.

For irregular rulings and toxicity, the moderation team of Twitch has come under the radar. Mixer, on the other hand, has a better community due to its moderation team. In Twitch, streamers seem to have no repercussions if they break the rules.

Mixer live stream platforms seem to be only constrained towards gaming, but there are other categories; no viewers are interested in watching them; Twitch, on the other hand, is a platform for your creative works.

The significant difference I noticed when comparing both platforms is that Mixer is more interactive than Twitch. Interactive features in Mixer are plenty, while Twitch is just concerned with watching the stream.

When it comes to options, Mixer has a plethora of choices Twitch feels more expansive. Therefore depending on the user perspective, you decide to prefer between both.

6. Similarities Between Both Platforms

Both streaming platforms provide similar content, and gaming is one of the common subjects you see on them. The landing pages are similar, with recommended streams appearing under the heading.

Also Read: What Happened to Myspace? Does it Still Exist? (All You Need to Know in 2021)

Overall, creators have preferred Mixer because attracting initial viewers is more comfortable, and you should know that, I cannot say the same for Twitch. A smaller audience means few donations and even fewer subscribers. This can be a red flag if you are looking to increase brand awareness.

But if you manage to get into the top tier of Twitch, then boom, the rewards are sky-high. You can get a huge audience in days, and the audience being real monetization and fame. If you are willing to work hard, it could pay off in the future.

What Do People Think About Mixer Vs? Twitch Comparison? Which is Better? According to People’s Review and Internet Research

Take a look at the screenshots to know more about the actual fight of Mixer Vs. Twitch 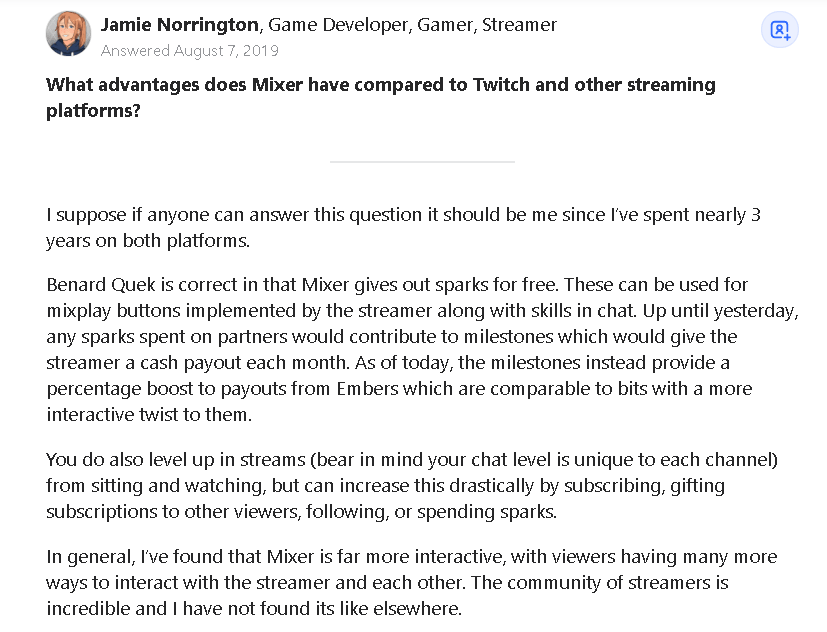 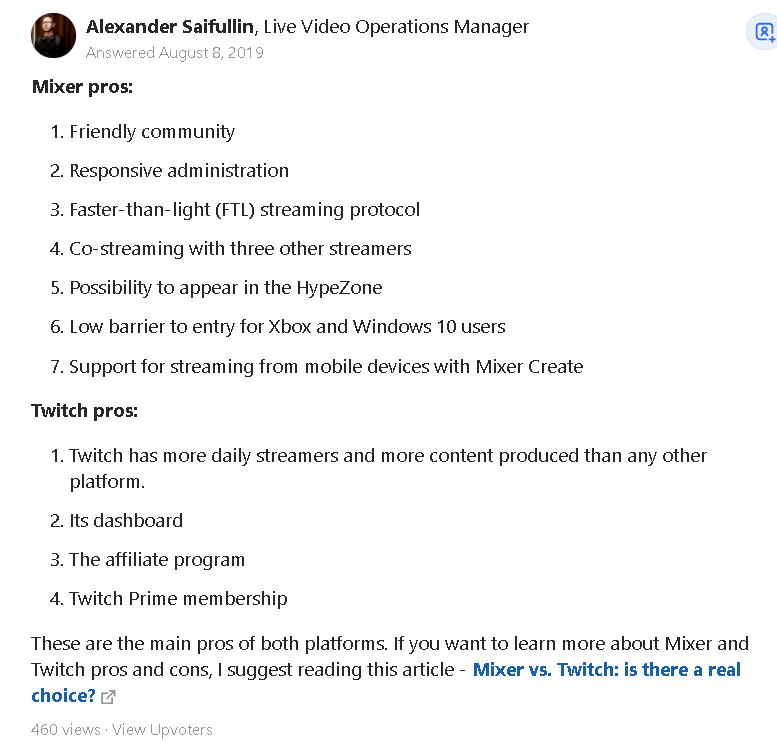 In all honesty, as a gamer, I feel like it depends on what you are looking for. Which one do I like better? If you are looking for many options and features, I would suggest Twitch is a better recommendation. If you want to get famous quickly, Mixer is suitable.

Mixer has a very simplistic style compared to Twitch, and for this reason, many users prefer to use the latter. Try them both and find the platform which you enjoy the most.

1. Is Mixer easier than Twitch?

If you are a beginner, getting those first 10 to 30 viewers will seem easier in Mixer. Twitch has vast competition and a lot of streaming activity, so it is a little harder to get in the game.

2. What is the monetization between Mixer and Twitch?

Both Mixer and Twitch have similar streaming options for monetization. The basic account is priced at $4.99 while $7.99 for a pro subscription.

3. Who is the number one streamer on Twitch?

Ninja, a professional gamer who streams Fortnite game performances, is considered number one on Twitch, according to TwitchMetrics.

If you have found this article helpful, do let us know in the comment section below!