After The Moon landing, there was a Reddish appearance that attracted the attention of the space researchers, which is often described as the “ RED PLANET” – THE MARS. It was named after the Roman God of War and is the fourth planet from the Sun. Mars appears red in color due to the rocks and dust covering its surface being rich in Iron. Mars is a red terrestrial planet which has a very thin layer of atmosphere composed of Carbon-Dioxide. Mars’ landscape is dry rocky surface coated with lots of fine red dust which makes mars a red desert. Mars is also known as “EARTH’S LITTLE BROTHER”, among all the planets which we have in our solar system it resembles our Earth the most.So let’s find what are the weirdest and mysterious objects seen on Mars.

In 1960, the first spacecraft was launched for Mars where the exploration mission started for developing a new revolutionary view of Mars as an Earth like world with a complex geological history with the help of four orbiters and four landed mission. There has been at least 68 mission launched to the Red Planet. In our solar system apart from the Moon most missions have been attempted for Mars and about half of those attempts have failed. These failures occurred primarily because Mars was the First planet Earth attempted to explore. The failure of the early explorations attempts taught us many lessons, which have made subsequent missions more successful.

The Active “Curiosity Rover“ has detected these “MYSTERIOUS OBJECTS SPOTTED ON MARS”. Curiosity is the name of the rover which was launched on 26th November 2011 and it took over eight months while traveling 560 km to reach Mars. It landed on Mars on 6th August 2012 and has been on Mars for 1289 total days till date. It is still  on Mars(as of writing this article). Curiosity is a Car-Sized Robotic Rover exploring Mars as a part of NASA’s Mars Science Laboratory. The Curiosity design will serve on Mars as a basis for planned Mars 2020 rover.

Curiosity Rover weighs 900 kilograms and is powered by a radioisotope thermometric generator and lithium-ion batteries. It is composed of 17 cameras and 10 other scientific instruments along with a mobile organic chemistry lab and a laser that can vaporizer rocks. The Mission of the rover is to study the climatic condition of Mars, geology of  Mars and determine whether Mars could even have supported life and help us plan for a human mission to Mars.

The Curiosity Rover revealed that the Red Planet is mostly inhabited by rocks, lots of rocks. The photos of  Mars taken by the Curiosity Rover revealed a few mysterious objects found on Mars. So that proves the evidence of prehistoric life existence of extraterrestrial activity on mars.
The rover has also made the key discoveries such as the detection of organic materials. The Curiosity, a robot which can work on all terrain is a remotely controlled four wheel drive vehicle and is charting Mars with close up images by exploring the surface of Mars. The pictures captured resembles things like lizard, mermaids, traffic lights,  jelling donuts, statue of  women, faces, bones,  iguana, finger, Mars rat, thigh bone, skull, helmet ,door handle, flower etc. 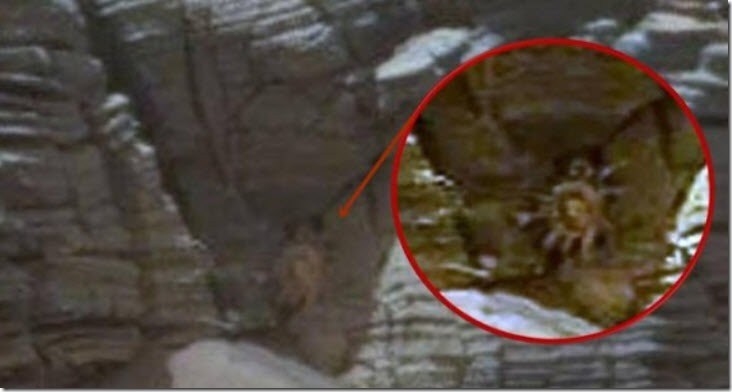 A strange creature was spotted on mars which has ten limbs like structure   that closely resembles like Crab that live on the Earth. The crab was spotted in between the Rocks. It was observed by the Curiosity when the picture was taken closely. 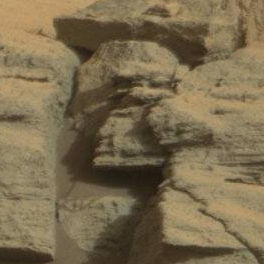 A Martial face curved image was spotted on the surface of the Mars which the rover has captured. The image clearly resembles the face has a sharp nose and eyes even. 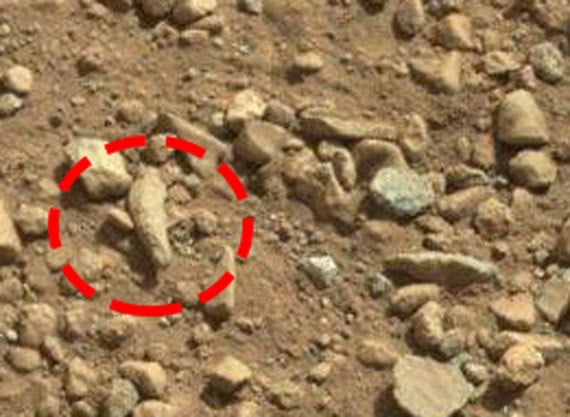 Mars was surrounded with Rocks and lots of Rocks. In between the rocks the Curiosity captured a image of finger that exactly resembles the Human finger even with Finger nail. 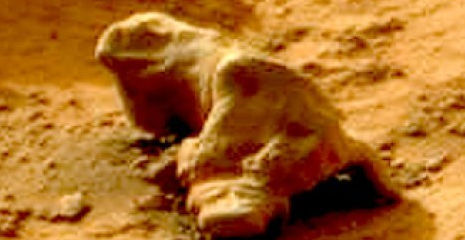 A Bear like creature was found on Mars as it is lying in the Rocks. The  face of the creature resembled like some animal, it has got a tail and even legs look like they have been holded.

Like wise the curiosity is still continuing to spot the objects on Mars. These images captured by the Curiosity when examined closer found that its nothing but Rocks.

This picture clearly shows that it is not shell, it is just a rock with fine red sand particles.

In 19th century, it was observed by the astronomers that they thought life existed on Mars.  The external appearance of the Mars made them to think so. The lines on the surface on Red planet looks like canals and the dark patches resembled what were thought to be vegetation.

The Martian Atmosphere of the Red planet  is much thinner than Earth’s atmosphere. Mars being pretty close to the Sun, charged particles from the Sun carried by the solar winds have triggered the thinning of Mars atmosphere. Because of it the Mars lost any ability it had to support Life. The charged particles has removed the the whole atmosphere because the mars doesn’t have a mangetic shield protecting it like the ones we have here on Earth.

So people could not live on Mars without the artificial Life Support, there is not enough oxygen in atmosphere and the temperature is also too cold to sustain an life. The Scientists says that this is nothing but a case of  Pareidolia.

Pareidolia is a psychological phenomenon involving a stimulus (an image or a sound) wherein the mind perceives a familiar pattern of something where none actually exists. Common examples are perceived images of animals, faces or objects in cloud formations. It also can be seen in the “man in the moon”, the “moon rabbit” and hidden messages within recorded music played in reverse or at higher or lower than normal speeds.
The array of weapons, temples, bones and living beings are nothing but similar strange shaped objects all resembling to be in an identical shape next to rock. So these mysterious objects found on the Mars are nothing but rocks. It was just an illusion of life on Mars as proven by the scientist analyzing the data.