Myspace is a company that was launched before Facebook, but now it has gone obscure in everyone’s eyes. Founded by Tom Anderson, Chris DeWolfe, and Brad Greenspan, the excellent social media site was taken from the inspiration of Friendster.

Mixing the features and tweaking a few things, they made the first version of Myspace within ten days. Many wondered how they could have achieved this feat by only using basic HTML. The popularity it drew was immense and attracted plenty of celebrities to the network site.

I’m sure you’re wondering what happened to myspace, which was on the path to success. If you doubt if people still use myspace, then this is the right article for you!. Let’s dive in to find out the reason behind the failed Myspace fame!

Table of Contents hide
1 MySpace
2 What is MySpace? Why Was it So Popular?
3 What Happened To Myspace?
4 What are the Reasons Behind Myspace Fail Compared to Facebook?
5 Does Myspace Still Exist?
6 Does Your Old Myspace account still exist? How to find your old Myspace profile?
7 What are the Pros and Cons of Myspace?
8 Top Features of Myspace That Makes Anyone Miss It Till Now
9 What Do People Think About The Existence of Myspace? According to Internet Research and People’s Opinion.
10 The Bottom Line
11 FAQs

What is MySpace? Why Was it So Popular?

MySpace is a social networking service based in America. During the years 2005 to 2008, it was considered the world’s largest networking site before Facebook. It reached more than 100 million users every month. It even beat Yahoo and Google as the most visited website in the United States.

As one of the first websites to reach a global audience, it significantly influenced culture, music, and technology. Not only that, the company employed over 1600 employees, and even Justin Timberlake purchased the company jointly for $35 million in 2009.

But today, nobody remembers when is the last time they visited the site, which was once valued at $12 billion.

What Happened To Myspace?

Although MySpace was in the prime during its beginning and unfortunately, the new ad targeting feature of Facebook overtook the former in rankings. Users seemed to have discovered a much better and user-friendly website.

As the site’s popularity plummeted, MySpcace was sold out for a paltry sum of $35 million. Yes, the company was once valued at billions. As of 2014, the company was called MySpace to Myspace with a lowercase ‘s’ in the middle.

It had more than 1600 employees, but it came down to mere 200 employees after the sale. Later redesigned the site to give a modern feel with distinct accents taken from other social media sites’ inspiration.

Overall, the main reason for the fall of Myspace is its competitor Facebook.

Also Read: Which Is The Safest One? (Grubhub Vs Doordash) In 2021

What are the Reasons Behind Myspace Fail Compared to Facebook?

Here are some of the reasons why Myspace seems to have lost its touch and is not relevant anymore.

Advertising was the initial source of revenue for Myspace for a long time. To counter the decreasing user base, the website’s investors and other partners pressured to take up an aggressive approach in displaying advertisements.

This made their site look like a mess and don’t stay afloat with recent ad targeting options. The website was cluttered with so many ads that it looked almost attractive to anyone during the interface. Compared to this, Facebook offered a much cleaner interface at that time.

2. No Creativity in User-Interface

Myspace had a unique customization option where users can customize their profiles with requirements. But this needs the users to know HTML. Later on, the company realized the problem and tied it to update in terms of better design and UI.

But the years already moved on as it was too late.

Myspace only censored illegal content and seemed to ignore issues related to hate speech, nudity, and others. This feature is way too important in today’s world. This allows youngsters to come across inappropriate content.

It led to Myspace getting negative reviews from parents and the press.

Another thing that led to the downfall of Myspace is that it constantly underwent website redesigning. It changed hands among four companies already, and every owner made significant changes.

Overall, it is estimated that over 50% of the users left Myspace simply because of their frustration. Tom Aderson, who helped co-founded the company, also expressed his increasing distaste in this constant redesigning process.

During the time, Facebook and Twitter were continually focusing on adding innovative features to Myspace. This allowed the users to use it easily. Myspace failed to look ahead and add newer features to their site.

Even though other platforms had those features, Myspace did not accelerate innovation when it comes to them. This made plenty of users get fed up and leave the platform altogether.

Myspace allowed users to use any anonymous usernames instead of their real names. Users were also allowed to use any email and did not require them to be a part of other institutions.

On the other hand, Facebook made users give their real names so that people can connect with them on a personal level.

Many users want to know the answer to this. Yes, Myspace still exists, and it is far from over. The domain is still running. Currently, it has been owned by Time Inc. since February 2016. Since then, various redesigning has already taken place. It is still receiving visits from millions of users.

Does Your Old Myspace account still exist? How to find your old Myspace profile?

You just need to type myspace.com in your browser. Search for your name in their search bar, and there you go. You don’t need to remember your old password or create a new one to access public accounts.

It is easily accessible to go through your photos, videos, and any other uploads. If you want to delete your profile, it can be done in a few clicks too.

What are the Pros and Cons of Myspace?

Here are the list of pros and cons I have found worth sharing with you!

Top Features of Myspace That Makes Anyone Miss It Till Now

Here are the top features of Myspace that you must know!

Are you familiar with the phrase “you looked better on Myspace” because it still exists? The picture is usually recommended by taking it from holding it above the head to the side of your face to reflect your physique in a relaxed manner.

This is one of the coolest things ever because the customization attracted the users, but later it was what repealed them. But this feature later made the website so cluttered that many started leaving it for other sites.

3. The Feeling of Victory

When your friends add your name to the top eight list, the feeling of ride and victory you get is merely worth it. But it is stressful to think about adding your top eight friends if you think about it deeply. I even had fights with my friends over this!

Well, who in the world forgot the mystery surrounding Tom Anderson, who is the person behind the company Myspace. He was friends with everyone.

What Do People Think About The Existence of Myspace? According to Internet Research and People’s Opinion.

Take a look at these screenshots to know what people think about “is myspace still around?” 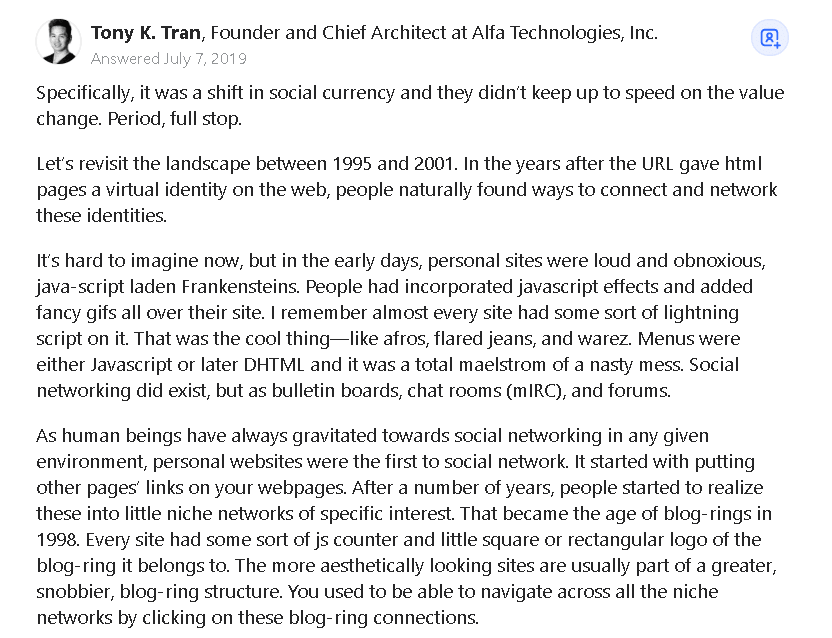 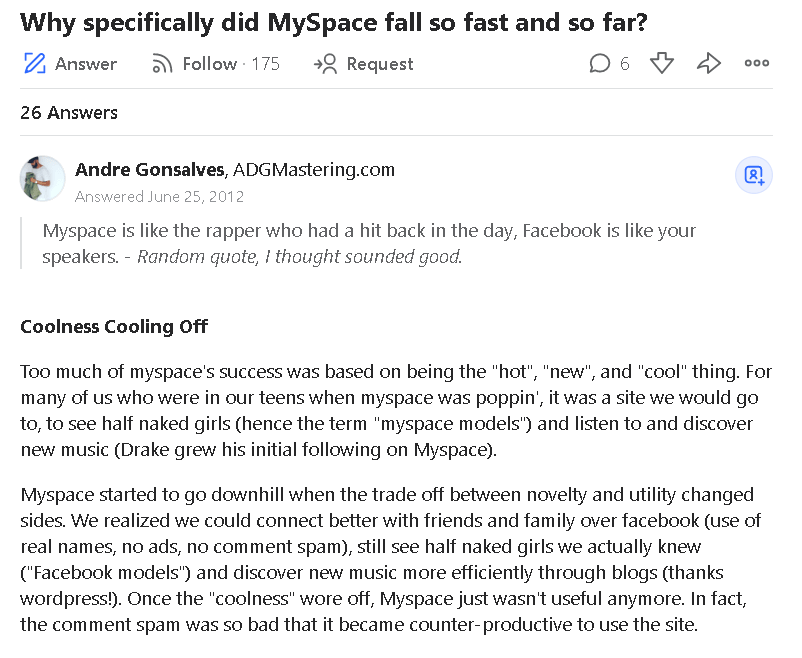 What was once a trailblazer exists as a domain now. When it was launched at first, users had fun uploading pictures, blogs, and other posts. Moreover, it offered the freedom to customize their profiles given if you knew a little bit of HTML.

However, it has not died completely. You can find entertainment news and other articles on the website. Overall, it has lost the touch it once had with Facebook.

Yes, if you type the website domain, you can find it. If you have an old profile, it is easier to find it too.

2. Does Justin Timberlake Own Myspace?

Yes, it was a joint investment on Myspace by Justin Timberlake.

3. Does anyone still use Myspace?

Myspace is not dead, it still exists. Since the domain is up and running, people can find their profile here.

Ten years ago Myspace reached its heyday due to the significance of other social media sites. But your account might still be there. So, it may not be deleted.

How to hire react programmer who codes like ninja