What will happen when the sun die?Everything Will End?

Contents hide
1 What will happen when the sun die?Everything Will End?
1.1 Darkness will swallow the Earth
1.2 Nuclear Fusion in the core of the Sun will Stop
1.3 The temperature of Earth will be Drop
1.4 The Sun will become a Red Giant
1.5 The Solar System may come to an End
1.6 Life on Earth will come to an End
1.7 Plant Life will Go Extinct

Everything in this universe will come to an end eventually, and the Sun is no exception to the rule. What Will Happen When The Sun Dies is a question that used to haunt the scientists for a long time.This star stands as the primary cause of the living beings on earth. The Sun is the main source of energy in our solar system which is an essential element of life on earth. The Sun also helps the plants to prepare their food by the process of photosynthesis. Though it has been standing there for millions of years, it will die eventually. At present, the sun is present in the stable section of its solar lifecycle. It will be staying up there for another 5 to 5.5 billion years.

As the sun will start to become a dome, depleting the supply of hydrogen, life on Earth will severely get affected.

There are several other ways by which the disappearance of the Sun will affect the Earth and the Universe. Here are a few speculations about what will happen when the sun dies.

Darkness will swallow the Earth

The sunlight which is just photons from the Sun takes a small period of eight and a half minutes to reach the surface of planet Earth. So living beings(if there are any left) would not notice immediately once the Sun completely dies. However after nine minutes, we will be in complete darkness in the vast expanse of space with the closest star to our solar system about 4.37 Light-years away.

Nuclear Fusion in the core of the Sun will Stop

The sun is known for emitting energy from ration waves of high length to visible X-ray light rays all over the light spectrum. Its surface has a temperature of 5800 Kelvin, which is an enough to melt everything. However we are 1500 million km away from the, and the temperature is significantly cooler here.

The innermost quarter of the sun is almost 14 million Kelvin. About 620 million tons of hydrogen is known to get converted into helium every second. The energy released is equivalent to 1.8 billions time of our most powerful nuclear weapons. Owing to the ultra high energy in the core of the Sun, gamma rays will get radiated which will result in green skin and huge muscles whenever you will get angry. It will lead to cancer and several other fatal diseases because by then our magnetic fields surrounding the planet will have worn out and there will be nothing there to protect us. However, we have a few thousand of kilometres of atmosphere before these gamma rays reach us and they will. 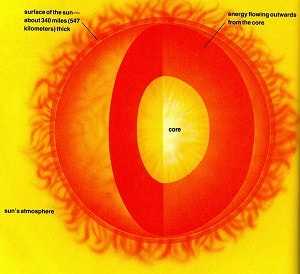 The temperature of Earth will be Drop

Without sunlight, the Earth would become a very cool place very rapidly. However, Earth has the capability to retain heat well. So though life will become desperate, living beings wouldn’t get frozen immediately. It has been estimated that the average temperature on the surface of the earth will drop below 0 F in a week and -100F within a year. During that period, the top layers of Ocean and atmosphere will freeze, resulting the air to fall on earth. Thus, life would come to an end owing to the exposure of harsh cosmic radiation, travelling through space. The frozen top layers of the Earth’s oceans will insulate the water deep inside but after hundred of thousands of years they will eventually freeze, and the entire earth will move towards an average surface temperature of almost -400F.

The Sun will become a Red Giant

Stars consist of mostly hydrogen along with traces of helium and other elements created after the Nuclear Fusion. Since gas has mass, owing to the accumulation of it in a single place, it collapses as a result of its weight. Thus, pressure is created in the interior of the Sun which in turn heats up the Gas till it becomes so heated that the electrons will get stripped off the atoms, resulting the gas to become ionised. Hydrogen atoms, consisting of a single atom will fuse with other hydrogen atoms to form helium, composed of two protons and two neutrons. Energy is released by the fusion in the form of light and heat, resulting in outward pressure which stops the gas to collapse more. Fortunately, there is a prerequisite hydrogen to keep the process going for a billion of years. But with time, all of the hydrogen in the core of the Sun will be fused into helium. After which the Sun will not be capable of generating enough energy and will start to loose its bright glow. The weight would not be able to produce the right amount of pressure for fusing helium. The helium core will in turn start collapsing. In the process, it will get more heated up owing to the increasing pressure, resulting in more light and heat. Thus, the Sun will get turned into a Red Giant.

As the Sun will turn into a red giant, it will engulf planets of Earth, Mercury and Venus. It may also push the planets on the left in the outward direction. The sun will span almost 150 times the size not it is at that point. Until eventually the mass of helium core is enough to ignite and start fusing helium to produce newer elements.

The Solar System may come to an End

Since all the energy of the Sun will cease, our Solar System itself may come to an end. Everything will be at a constant temperature, and there will be no more chemical reactions for a long time. Hence, there will be no flow of information, thereby stopping thought, intelligence and imagination. Work processes will also stop at that time.

Life on Earth will come to an End

Hydrogen happens to be one of the primary sources of energy and light for our little planet, necessary for the survival of all living beings. If you are looking forward to What Will Happen to Earth When the Sun Dies, the news is that since the flow of power through the fusion of hydrogen will cease, human life will eventually come to an end.

Plants prepare their food by the process of photosynthesis and sunlight and happens to be an integral part of the process. Thus, if the sun ceases to exist, all plant life will run out of food on the surface. Some may survive on the deepest ocean near underwater vents that release the heat from the earth core. Even that’ll eventually cease to exist.