Lexus has teased us all with a short video of a functioning hoverboard being ridden around a skate park. Is it real? Is it possible? Yes and qualified yes. WhiteDust will explain everything.

Lexus HoverBoard is the first floating board which comes to be in existing in this real world .As We know before past 2-3 years back,hoverboard was just a hoax to be believe.Some awesome scientists and developers of lexus made this possible in 2015 ,so we can now say that,yes hoverboard do exist like any science fiction movie.The world’s first floating board which made by lexus.

If you don’t know what is a hoverboard then read this for your own instructions to the knowledge: So basically hoverboard is like a skate board which don’t have any wheel down side of the board but the most important part of this hoverboard is that it floats in the air.Hoverboard don’t touch the ground actually it floats in the air ,If you thinking that it flies in air to anywhere then you are totally wrong .In reality hoverboard just uplifts itself from the ground like 7-8 cm above the ground.So it can slides like a skateboard but in air without touching the ground.

HoverBoard was using in past science fiction movies and it was very hard to believe about its existence but after various researches and tests ,hoverboard comes in reality in 2015 which is really a hard to believe news for everyone.Scientists currently completed the design in 2015 as they were working from last 2 years to make it possible.

So How This Lexus HoverBoard Work?

Everyone’s talking about this crazy new hoverboard that looks too good to be true and it sort of is. But trust us, the truth is super cool! That was a pun. You’ll get it once WhiteDust explain how it work actually. Full documentary how this hoverboard works actually which is made my lexus.It is also called Aircraft or AirBoard by some people but whatever it is ,its finally on real life.

What’s not shown in the video is the hidden magnetic track which Lexus installed in the Barcelona skate park. That may seem like cheating, but it’s more complicated than just using magnets.If you’ve ever played with magnets and tried to levitate one above the other, you know it’s not easy. As soon as you let go, the magnet will just flip around and get sucked to the other one and that’s really the opposite of what you want. But that problem doesn’t exist with some superconductors.

Superconductor is a material that, when cooled past a critical temperature, lets electrons move freely within it with zero resistance. Obviously this makes them great for high current wires, but the freely moving electrons do something else too. They create currents on the surface that screen the superconductor from magnetic fields. As you cool a superconductor past its critical temperature it expels magnetic fields, and this is called the Meissner effect.If you put a superconductor by a magnet, it will repel it. Put one above the other, and it’ll levitate. This is called Quantum Levitation.But not all superconductors are created equal. Some, called Type-II superconductors, actually
have little vortices of current and the center of each vortex is like an eye of a storm.

In the middle, the material behaves normally and lets some magnetic field lines, or flux,pass through. When We say “some” We should note it’s still quite a lot. A 3 inch disk can have as many as 100 billion flux lines passing through it. The superconductor will actually pin the flux lines and will appear to lock itself in place levitating above a normal magnet. So they don’t just exhibit Quantum Levitation, but Quantum Locking too. No, not like the weeping angels, Whovians. Anyway, you can move the magnet around, even put the superconductor underneath it, and it will still stay locked where it was. Plus with all those flux lines pinned down, a 3 inch disk just half a micron thick can support 70 thousand times its own weight. So it locks in place above a normal magnet, but if the superconductor is above a circular magnet, it can rotate around the axis of the magnet. You can expand that circular magnet to a track any size and shape you want and, say, hide it under a skate park. Put a Type-II superconductor above it, give it a little push, and it can happily zoom around the track no problem. Mind you, there are limitations. 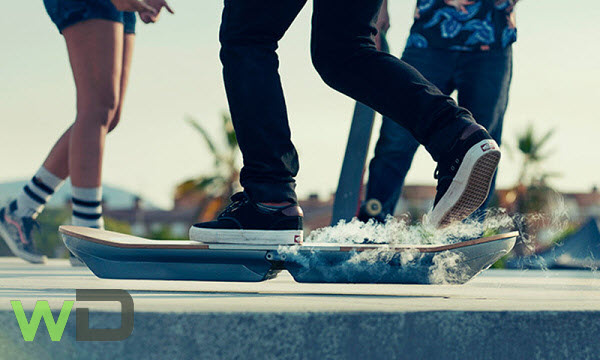 The superconductor has to be cold. Like, really really cold. Even so-called “High Temperature” superconductors need to be at least -135 degrees celsius. To hit those temperatures you need to use liquid nitrogen, which explains the thin wisps of smoke and frost coming from Lexus’ hoverboard. The superconductor also has to be thin, because the thinner it is the stronger the flux-pinning effect. And the magnetic field can’t be too dense. Too much flux per meter squared and the vortexes overwhelm the material, turning it back into a not-so-superconductor. By the way, the unit for magnetic flux density is the Tesla. that’s right, Tesla has his own unit of measurement.

We thought you’d like that, internet. Type-II superconductors were discovered in 1935, 20 years before the first Back to the Future took place. But Robert Zemeckis wasn’t around then to show us the way, and now in 2015 his vision is finally realized. So long as you keep your super thin superconductor super cooled, you too can have a hoverboard. Provided you don’t mind going around in circles on a magnetic track. Which would still be really cool, but wouldn’t help you if you’re trying to get away from Biff’s larcenous grandson. Magnetic levitation can be scaled up too and because the only friction is from air, that means you can get going pretty fast. Trace talks about maglev trains here.

How Can MITRE ATT&CK Matrices Enhance Your Security In 2021

Best free software everyone should have on their PC